The Mechanicals are a four-piece band from Philadelphia, PA. Most people would say they play "indie rock", whatever that is, while others prefer to keep things plain & simple & just call it "rock & roll." A certain radio personality once even described their sound as "beard rock", which is pretty cool, despite the fact that Greg can't grow a beard to save his life. "We just play as honestly & as desperately as we can," says frontman Jaryd. "We're not really sure how else to do it." ead more on Last.fm

The Me In You 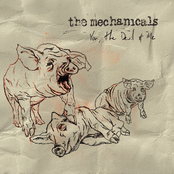 You, The Devil and Me

You, the Devil and Me EP