Artist: Exit This Side

Four-piece band from Vancouver, BC, Canada (or somewhere around there). In addition to their own songs which are beginning to get some airplay, they also do some rather energetic covers during live shows. Exithiside has been rocking the Vancouver music scene for years now. The band formed in high school and have been going hard ever since. With a few tours under their belt, opening for such bands as Goldfinger, Billy Talent, Hedley, Gob, Swollen Members ead more on Last.fm

Top Albums exit this side 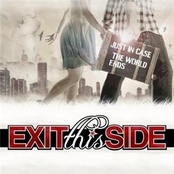 Just In Case the World Ends

Inside A Bathroom Stall

Just In Case The World Ends...

Exit This Side - EP

Just In Case This World Ends