“Prince William with a Black Eye” is an oxymoron Blue Reign likes to use to describe their blend of Sophisticated Rock. They fuse catchy simplicity with introspective lyricism, jazz influenced chords, and straight rock grooves. Their sound reflects a range of influences from Coldplay and Radiohead to Foo Fighters and Storm Large and the Balls. The band is already creating quite a buzz at this early stage in their career. They have become very active in the Portland market with gigs at such venues as the Hawthorne Theater ead more on Last.fm 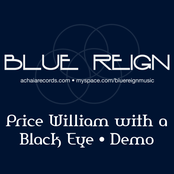