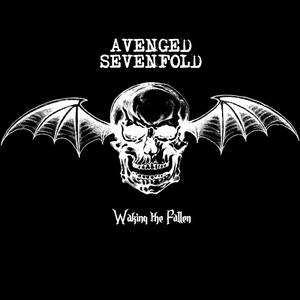 Waking the Fallen is the second studio album by American heavy metal band Avenged Sevenfold, released on August 26, 2003, by Hopeless Records. More clean vocals are featured on the album than their debut album, Sounding the Seventh Trumpet. It is also the first album to feature Johnny Christ on bass, thus completing the band's primary lineup (until The Rev's death in 2009). The album was released as 2x12", LP, Repress, 33 ⅓ RPM, Grey Marble on 2008 in US. The album was certified gold on July 15, 2009. The only song on the record that does not contain screaming is "I Won't See You Tonight (Part 1)". It's noteworthy that the bands first album, Sounding the Seventh Trumpet had three songs that were all clean vocals, "To End the Rapture", "Streets" and "Warmness on the Soul". As with Sounding the Seventh Trumpet, most of the song's from this album are not usually performed live, although, "Unholy Confessions" has always been a staple to their set since the release of Waking the Fallen. Also, "Second Heartbeat" & "I Won't See You Tonight Pt.1" are still performed commonly. The song "Eternal Rest" was commonly performed prior to 2007. The record continues the metalcore sound the band had used on their previous album, Sounding the Seventh Trumpet, but features noticeably more clean vocals. Being the first release by the band to feature lead guitarist Synyster Gates, the record also features some guitar solos. The record is notable among fans due to M. Shadows' slightly higher pitch in his voice and high notes he sings on songs like "I Won't See You Tonight" (both parts). The album also leans more towards heavy metal rather than punk rock. User-contributed text is available under the Creative Commons By-SA License; additional terms may apply.