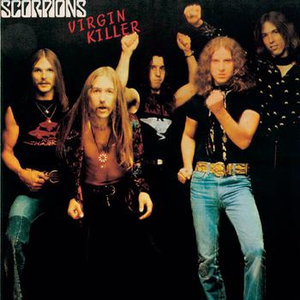 Virgin Killer is the fourth studio album by the German rock band Scorpions. It was released in 1976, and was the first album of the band to attract attention outside Europe. The original cover, featuring a naked prepubescent girl, stirred controversy in the United States and elsewhere. It was subsequently reissued with a different cover. Reception Virgin Killer shared the same fate as the other Scorpions albums featuring lead guitarist Uli Jon Roth: it "failed to attain any serious attention in the United States" but was "quite popular in Japan" where it peaked at number 32 in the charts. The album was another step in the band's shift from psychedelic music to hard rock. Critic Vincent Jeffries of Allmusic contends in hindsight that the album was "the first of four studio releases that really defined the Scorpions and their urgent metallic sound that was to become highly influential." He also counts the title track and "Pictured Life" among the "all-time Scorpions standouts." Among the band members, Uli Jon Roth considers Virgin Killer and the previous release In Trance as his favourite Scorpion albums. Cover art The original cover art for the album depicted a naked prepubescent girl. The image was designed by Steffan Böhle, who was then the product manager for RCA Records. Francis Buchholz was the bassist for the band and, in an interview conducted in early 2007, recollects that the model depicted on the cover was either the daughter or the niece of "the guy who did the cover design." The photograph was taken by Michael von Gimbut. The band's rhythm guitarist Rudolf Schenker offers the following description of the circumstances behind the album cover. “We didn't actually have the idea. It was the record company. The record company guys were like, 'Even if we have to go to jail, there's no question that we'll release that.' On the song 'Virgin Killer', time is the virgin killer. But then, when we had to do the interviews about it, we said 'Look, listen to the lyrics and then you'll know what we're talking about. We're using this only to get attention. That's what we do.' Even the girl, when we met her fifteen years later, had no problem with the cover. Growing up in Europe, sexuality, of course not with children, was very normal. The lyrics really say it all. Time is the virgin killer. A kid comes into the world very naive, they lose that naiveness and then go into this life losing all of this getting into trouble. That was the basic idea about all of it. ” In a separate interview, Schenker also notes that he thought the cover art was a "great thing" and that he had "pushed the band to really stay behind it" as he felt that people would "think differently" when they looked at the lyrics and realized that the cover art was only being used as "a symbol of the lyrics." The band's former lead guitarist Uli Jon Roth notes that the cover art of the "old Scorpion albums" were "usually done by other people." He has since expressed regret over the original album cover. “Looking at that picture today makes me cringe. It was done in the worst possible taste. Back then I was too immature to see that. Shame on me — I should have done everything in my power to stop it. The record company came up with the idea, I think. The lyrics incidentally were a take-off on KISS, whom we had just supported on a tour. I was fooling around and played the riff of the song in the rehearsal room and spontaneously improvised 'cause he's a virgin killer!' trying to do a more or less way-off-the-mark Paul Stanley impersonation. Klaus immediately said 'that's great! You should do something with it.' Then I had the unenviable task of constructing a meaningful set of lyrics around the title, which I actually managed to do to some degree. But the song has a totally different meaning from what people would assume at first. Virgin Killer is none other than the demon of our time, the less compassionate side of the societies we live in today — brutally trampling upon the heart and soul of innocence. ” The cover generated controversy and was replaced in some countries with an alternate cover art depicting the band members. It would not be the last time that the band attracted controversy with their album covers. Their next album Taken by Force originally featured cover art that depicted "children playing with guns at a military cemetery in France and some people found that offensive." Their 1979 album Lovedrive featured a "bizarre artwork" that depicts "a woman on the back seat of a car with bubblegum over her breast." Both covers were replaced by an alternate design. Vocalist Klaus Meine explains that the band's penchant for controversial cover art stems from a desire "to go over the edge" and not "to offend some people or make the headlines [as] that would be stupid." Track listing Side one "Pictured Life" (Meine, Roth, Schenker) – 3:21 "Catch Your Train" (Meine, Schenker) – 3:32 "In Your Park" (Meine, Schenker) – 3:39 "Backstage Queen" (Meine, Schenker) – 3:10 "Virgin Killer" (Roth) – 3:41 Side two "Hell Cat" (Roth) – 2:54 "Crying Days" (Meine, Schenker) – 4:36 "Polar Nights" (Roth) – 5:04 "Yellow Raven" (Roth) – 4:58 Credits Klaus Meine – lead vocals Ulrich Roth – lead guitar, lead vocals on "Hell-Cat" and "Polar Nights" Rudolf Schenker – rhythm guitar, backing vocals Francis Buchholz – bass, backing vocals Rudy Lenners – drums, percussion Achim Kirschning – synthesizer, keyboards Dieter Dierks – arrangement, production User-contributed text is available under the Creative Commons By-SA License; additional terms may apply.