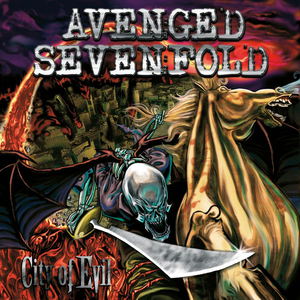 City of Evil is the third studio album by Avenged Sevenfold released on June 6, 2005 by Warner Records. Co-produced by Andrew Murdock, City of Evil contains a more traditional heavy metal and hard rock sound than Avenged Sevenfold's previous two albums, which showcased a predominantly metalcore sound. The album is also notable for the absence of screaming vocals. M. Shadows worked for months before the album's release with vocal coach Ron Anderson, whose clients have included Axl Rose and Chris Cornell, to achieve a sound that had "grit while still having the tone". In order to increase stamina and strength on the pedals, The Rev would sit for hours practicing until he could get up to 210 beats per minute. The album was ranked No. 63 on Guitar World magazine's "100 Greatest Guitar Albums of All Time". City of Evil also appears in Kerrang!'s "666 Albums You Must Hear Before You Die" and "50 Albums You Need To Hear Before You Die". The album was ranked No. 35 in Kerrang's list of "50 Greatest Metal Albums Ever" in 2016. Rolling Stone listed the album at No. 100 on its list of The 100 Greatest Metal Albums of All Time. The album contains some of Avenged Sevenfold's most popular and famous songs, including "Bat Country", which is arguably their most successful to date, being one of their two singles certified Gold by the RIAA. City of Evil was very successful after its release, debuting at number 30 on the Billboard 200 chart and certified as a platinum record by the Recording Industry Association of America in August 2009. It went on to sell over 1,500,000 copies in the United States, and 2,500,000 total worldwide, making it the best-selling album out of Avenged Sevenfold's discography as of 2015. "Bat Country", "Beast and the Harlot" and "Seize the Day", were also released as music videos, directed by Marc Klasfeld, Tony Petrossian, and Wayne Isham, respectively. The Rev performs backing vocals on the tracks "Bat Country", "Trashed And Scattered", "Strength of the World", "Seize The Day", "Burn It Down", and "M.I.A." "Blinded in Chains" was also featured in the video game, Need For Speed: Most Wanted, and is also the theme of the Blacklist member, Vince "Taz" Kilic. The album title is derived from a lyric in the song, "Beast and the Harlot". User-contributed text is available under the Creative Commons By-SA License; additional terms may apply.