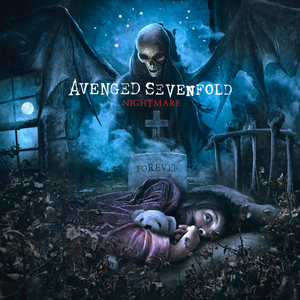 Nightmare is the fifth studio album by American rock band Avenged Sevenfold, It was released on July 27, 2010 through Warner Bros. Records; it was produced by Mike Elizondo and mixed in New York City by noted engineer Andy Wallace. Nightmare is the first Avenged Sevenfold record without James "The Rev" Sullivan performing drums because of his death in December 2009, although he wrote some of the songs before that time and is therefore the last studio album on which he contributed as a tribute, The Rev's vocals are still on the album. Mike Portnoy, from Dream Theater, who performed as the drummer for the album in his place, will also play with the band for all the upcoming tours through the end of 2010. Avenged Sevenfold, along with Disturbed, will co-headline the first annual Uproar Festival. The first single, "Nightmare", was released digitally on May 18, 2010. A preview for the song was released on May 6, 2010 on Amazon.com, but was removed soon after for unknown reasons. However, on May 10, 2010, a 30-second audio uncensored sample was again revealed, but this time at SoundCloud and on the band's official website. The band also posted, the same day, a video of the song on their official YouTube channel with animated lyrics, which received over 275,000 plays in 24 hours. User-contributed text is available under the Creative Commons By-SA License; additional terms may apply.