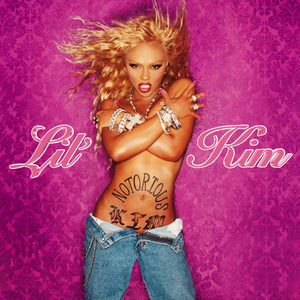 The Notorious K.I.M. is the second studio album by American rapper Lil' Kim. It was released on June 27, 2000, by Atlantic Records and her first album on her new label Queen Bee Entertainment. It debuted at number four on the US Billboard 200 chart, selling 229,000 copies in its first week, achieving Lil' Kim's highest peak and biggest first-week sales, and reached the top of the Top R&B/Hip-Hop Albums chart. A commercial success, The Notorious K.I.M. was certified platinum by the Recording Industry Association of America (RIAA) on August 2, 2000. It was the best-selling female rap album in 2000 with sales of over 1.4 million copies in the United States. To date, The Notorious K.I.M. has sold over 5.2 million copies worldwide.[1][2] The album spawned two singles that attained moderate Billboard chart success. Lead single "No Matter What They Say" peaked at number 60 on the US Billboard Hot 100 and number 15 on the Hot R&B/Hip-Hop Songs chart. The second single "How Many Licks?", featuring R&B artist Sisqó, performed similarly, reaching the bottom half of the Hot 100. User-contributed text is available under the Creative Commons By-SA License; additional terms may apply.